How Vineyard History Can Give Practical Insight to Discerning Prophetic Words 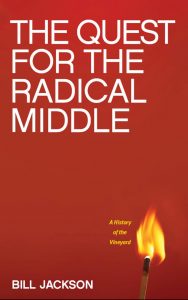 I started re-reading Bill Jackson’s book, The Quest for the Radical Middle. I remember years ago when I read this book, I was so captivated by the history of the Vineyard and I still am. I’m so grateful to be a part of the Vineyard. I came into the Vineyard in my early 20’s, and I’ve been so shaped by the values, practices, and Kingdom theology. I learned that even I could learn how to “Do the Stuff”—it wasn’t just for a select few that were uniquely gifted and called from birth with a prophetic birthmark from an angel stamping them as a prophet to the nations.

There is nothing wrong with being uniquely called, and I’m grateful for those who are prophetically gifted, but what about the rest of us ordinary every day disciples, pastors, and leaders? We discovered through John Wimber’s teaching, practice, values, and modeling that we all get to play. Then over time, some people grow into a gifting or ministry but never become a super star, but rather become an equipper so that more of the church can play and become more effective.

This message forever changed my life, and is still changing and challenging me. We have been given so much as a Vineyard movement, and we have a rich history. As I’m re-reading this amazing book by Bill Jackson in my mid-40s and now as a senior pastor, I’m so thankful for the good, the bad, the ugly; for the lessons learned, and the mistakes that allowed us to grow. This again lends itself back to our values such as no hype, everyone gets to play, and transparency.

With all that being said, let me get to the main point of why I wanted to write this post. With all the prophetic words from prophets / prophetic voices on issues—from COVID, to the presidential election, to mass revivals, and the end of the world—it can be a bit confusing and hard to discern and pastor. Maybe I’m the only one ☺️.

I so believe in and have personally benefited greatly from prophetic ministry, and I do my best to practice prophetic ministry for the benefit of others, not to gain a platform. I try to lean into this amazing gift Jesus gave the church so that others may be encouraged, come to Christ, and be built up and edified to love Jesus more.

Because of this, I have been greatly concerned with how a lot of the prophetic ministry is being handled and the incorrect idea that we are just to listen to the prophets blindly instead of weighing prophetic words (1 Thessalonians 5:20-22, 1 Corinthians 14:29-33).

This week I was reminded of Bill Jackson’s book, The Quest for the Radical Middle, and how in our own Vineyard history we have encountered some of these challenges before. Bill did a great job in fleshing out some of these prophetic issues, so I thought I would share some insights from the book that are helping me process current prophets and prophetic words, including words I’ve given (not on these subjects but from personal words to corporate words to even a few concerning nations with supernatural signs following… while I pee my pants in trembling).

I think that our problem with the prophetic was both with the prophecies themselves (some were clearly wrong) and with our inability to weigh them. Learning to weigh prophecy involves evaluating all three phases of the prophetic prophetic experience: revelation, interpretation, and application…

THE RESPONSIBILITIES OF THE PROPHET

First, the prophetic person has a responsibility before God and men to learn to receive accurate prophetic words and to communicate them in a way that edifies the church. Prophets must not go beyond their revelation and add their own “stuff.” This just muddies the waters.

Second, the language that is used to communicate prophetic revelation has tremendous bearing on what the hearer receives. Most of the prophecies were communicated as though they were going to come true, and later, when they didn’t happen, it was explained to us that they weren’t guarantees but rather invitations into God’s intent that were contingent on our or others’ obedience.

When a prophet says that such-and-such is going to happen and it doesn’t, this is errant prophecy. If it is a prophecy contingent on other factors, then the one who is prophesying is responsible for saying so, lest the person being ministered to be set up for disappointment. “God says” is very dangerous language.

Third, the setting in which a word is given is important. The words given the Vineyard during the prophetic era were often in front of thousands of people. This kind of setting put the recipients of the words under great pressure. There was generally no personal time with the prophets to help process the words, and people were left to go home to study the transcripts with local leadership teams who wanted to take the ball and run with it.

NT prophecy is to come in the context of the body of Christ and usually in conjunction with pastoral ministry (1 Corinthians 14:26ff). The process has to be relational; if prophetic words are spoken in larger contexts, I think time should be carved out with the prophet and a pastor to help people process the interpretation and application. Last, as was said above, the prophetic person has to be able to risk the potential rejection of having his/her prophecies weighed either by the elders or by the community.

They have to come into their ministry knowing that they are not always going to be right and that they will have to admit when they are wrong. The church, on the other hand, has to be careful to weigh prophetic words in an atmosphere of love so as not to damage the prophetic person.

THE RESPONSIBILITIES OF THE COMMUNITY

Not only do the prophets have a part to own, but so do the people receiving the word. I think interpreting and applying a word correctly takes just as much gifting and wisdom as does the revelation itself.

One of the trickiest problems in interpreting prophecy is to determine whether the prophetic person is getting revelation of what God intends, what the devil intends, or what the person wants.

The prophet, as was said above, must not interpret the revelation unless he or she is sure God is giving that interpretation.

This is a crucial distinction and requires the gift of discernment. On more than one occasion John Wimber was given the word that he was going to die. It was explained to us later that the prophetic person was receiving information on the devil’s plan for John and misinterpreted the word as a guarantee on the future. An accurate revelation wrongly interpreted can be destructive.

On other occasions prophets received words about such and such happening, but what they were reading was what the person wanted and not what God was saying would happen.

This kind of misinterpretation could lead to prophecies that do not come true. When a prophecy is given and we, not the prophet, interpret its meaning or timing incorrectly, this is not a problem with the revelation, nor with the one who gave it—it is now ours to interpret correctly with the help of wise counsel in the context of relationship.

If it is misinterpreted or misapplied, we have to own it as our problem and not make prophetic ministers the lightning rods for our unresolved issues. We need to weigh a prophetic word carefully to spot any theological or eschatological agendas that may be clouding accurate revelation. If it doesn’t fit what we believe biblically, we do not have to receive the word. We should not be party to any “charismatic witchcraft” that would violate our freedom to disagree with a word.

The prophetic can also offend our minds to reveal our hearts. It should cause us to wrestle in faith, in prayer, in scripture, and in community. It’s healthy to weigh and discern all prophetic words, no matter who is prophesying.

Giving an accurate prophetic word doesn’t make someone a prophet, just like leading someone to the Lord doesn’t automatically make someone an evangelist. Likewise, if known prophets happen to miss it on a prophecy, that doesn’t automatically make them false prophets either. Weighing and discerning also helps us to not throw the baby out with the bath water, so to speak.

A lot of prophetic words have been spoken over the last year, and we have seen the good, the bad, and the ugly all around—from those giving to those receiving. It’s important that we remember it’s healthy and right to discern and weigh not only the words given, but also how the words are given and how they are received.

May we all push into the possibilities of the prophetic gifting and at the same time learn from wisdom to avoid the pitfalls, because there is a person or people on the other side of the prophetic word, and we must minister in love always.

In the meantime, may we follow the way of love and eagerly desire gifts of the Spirit, especially prophecy (1 Corinthians 14:1).